July 18th,
What a wet night! Water everywhere this morning which simply lies across the paddocks without draining away. The track out from the Little Desert was narrow but EC loved the challenge and so did the driver.
Kaniva brought sunshine which was very welcome but the wind has been strong all day.
Our travels have taken us along the Murray River after we crossed it at Murray Bridge. The river is very different from how we see it in the NE. The cliffs and flats are enormous.
After a lot of driving up stream between Murray Bridge and  Swan Reach we have found a spot to camp, near a gravel pit,. We do not have a view of the river from here as we are a valley away from it.
Interestingly the walls of the gravel pit, which are up to 6 metres high, show dense layers of soil and shells. They appear to be mostly oyster shells which are very large, some as big as my hand. How long have these been here and how did they get here? The valley here was probably part of the Murray thousands of years ago. Were the shells dropped by the river water or were they discarded from Aboriginal feasts?
We also found a wombat's hole which contained shells in the diggings. It has been a fun night really as John lifted an old piece of tin..and under it was a large lizard in hibernation mode. He did not move so we covered him again to prevent attack from hungry birds.
The rig is rocking with the strong wind..hope it slackens a little. 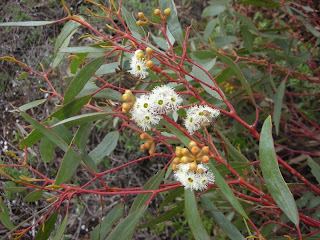