A very windy and wet cold front passed over us during the night. This morning it was freezing. We were only 6 km from Kerang where we filled with fuel as we continued east. The wind was strong and cold. We had intended to camp in the Barmah NP but expected it to be too wet so John booked a site at Cobram RACV Camping Resort. We did visit the Barmah Forest and the Red Gums are really lovely. The dark flood mark on their trunks is quite distinct. These trees benefit greatly from the Murray River flood waters. There were Horse activities (maybe mustering) going on in the area. It would have been a lovely place to camp but it would have been 'Oh so Cold'. Luckily we are in this Cobram Park plugged into mains power so we have the heater going.

Email ThisBlogThis!Share to TwitterShare to FacebookShare to Pinterest
Labels: 2017
2017 April 25th
We  packed the Starcraft in readiness  for travelling. A little rain had fallen over night which made the roads damp to drive on. The time spent in Wyperfeld NP was good fun and interesting for both of us. It is quite typical of some of the inland desert areas in that there are sand dunes, Cyprus pines, eucalypts and a variety of smaller bushes and flowers.
Today we have come eastward through Patchewollock, Ultima and several other small Mallee towns. All are marked with the tall silos which store the wheat after harvest. The wheat is then transported by rail to further afield market points. Since the rain most farmers are preparing to sow crops for this year.

.Tonight we are camped by Lake Reedy in an RV park which has been developed by the Kerang Apex Club.

A most enjoyable day which began with a short walk south of here to visit the site designated as 'Remote Campsite'. This is an area where you cannot drive to, but it was such a short walk that it would be very possible to carry light gear. It was a clean site with a drop toilet, BBQ/fire places and a picnic table. We were most impressed with this large open clean area.
Along the track we found a small aboriginal midden site with a variety of tiny bones. John also noticed a Male Mouse Spider crossing the track. He became agitated when we came too close. He actually stood up and parted his fangs. They are nasty looking creatures.
The remainder of the day was taken in driving on several tracks we had not been on. This park is actually ‘riddled’ with many tracks..up and over sand dunes, across dry lakes  and through old properties which were farmed in early days.. as far back as 1860 to 1930s. We checked out a well and a couple of water soaks and the site of an old Rabbiters Hut. During a very severe drought, pastoralists resorted to catching rabbits to assist their income. This hut was built during this time and has now been rebuilt in more recent times and remains a memorial to those early settlers. The historical photos showed the incredible number of rabbits which were caught.


Early in the evening a short sharp shower of rain came across so it was an inside dinner tonight! The forecast is for further showers tonight  and tomorrow.
Posted by JFB at 8:58 PM No comments:

Email ThisBlogThis!Share to TwitterShare to FacebookShare to Pinterest
Labels: 2017
April 23rd
A slow start after the big walk yesterday. With lunch packaged we set out to explore some more  tracks in this park. Some spots were quite wet after the recent rains. However with John’s careful driving we managed not to get bogged. There were a number of short walks off the tracks, two of which led to vantage points. The first was Kelly’s Lookout. This was a high sandy hill which was well washed leaving hundreds of small fossils visible. The Yellow Mallee trees on top had been burnt by fire but were now re -shooting from their lignatuber. The trees looked strong and fresh despite the dry desert conditions. We also had a little internet connection…surprise, surprise.
We climbed the next vantage point called O’Sullivan’s Lookout. It was quite a steep walk but worthwhile for the wide vista from the top, looking over the dry lake bed of Lake Wirrengren. Coming south we called at the Snowdrift Picnic area. Children were having a great time on the slope of the huge sand dune.


We chatted to the couple in the next camp who came and sat with us for an hour over the sunset. They are keen bird watchers so we had a few queries answered.

Email ThisBlogThis!Share to TwitterShare to FacebookShare to Pinterest
Labels: 2017
April 22nd
A clear still morning with a few clouds. We set off on the Casuarina Loop Walking Track which was advertised as a 4 km walk. The sign said it would take 2 hours. We arrived back at our camp 2 ¾ hours later. It was a long and interesting walk going through desert country, dry lakes on a sometimes muddy track. John estimated from the map that the loop walk was about double or more than the
4 km stated on the information sign. Needless to say I was weary as I don't usually attempt such long distances on foot. However it was a delight to see so many kangaroos and some emus as well as many different types of  birds.
This afternoon we drove over some of the tracks in the Park exploring further areas. Again there were several very damp spots on the track….it would be easy to become bogged.

It was a relaxing late afternoon as we cooked a small lamb shoulder for dinner. The slow cooking was most successful. We used Jeff’s rectangle camp oven on the gas…even roasted potatoes and pumpkin.

There are a few people in this camp ground tonight. Many stay only one night as we have often done. However staying 2 or 3 nights has allowed us to explore the immediate area more successfully and ensures a slower and more restful trip.

Email ThisBlogThis!Share to TwitterShare to FacebookShare to Pinterest
Labels: 2017
2017 April 21st
We awoke to a fine cloudy day. The rain had been heavy over night and we suspect that about 50 mls has fallen. The camping ground has drained and looks refreshed. By 9.30 am we were ready to leave.
We enjoyed exploring several of the small Mallee Towns. After visiting Yaapeet on Thursday and finding everything so quiet and closed we did not have high expectations. Hopetoun proved to be a much busier centre with a good range of shops. Patchewollock was again very quiet with only a few shops. We sat in the rail yard to eat our lunch. The nearby grain silo had a wonderful mural painted on it..depicting a young wheat farmer looking to the horizon. After the rain, a small lake had been formed. The birds were really enjoying it. From here we headed west toward the Wyperfeld N.P. to make our camp at the Casuarina Camping Ground. This is a lovely camp with Buloke trees and a few Mallee trees and Cyprus pines. Tomorrow we will explore on foot and in our vehicle. Let me finish with words from Dorothea McKellar's poem called My Country…'The wide brown lands and flooding rains'…How apt they are for this Victorian Mallee country
Posted by JFB at 8:32 PM No comments:

Email ThisBlogThis!Share to TwitterShare to FacebookShare to Pinterest
April 20th
Rain was eminent so we went for an early walk around the Discovery Track. It was about 4 km and took us nearly 2 hours. The sand made walking quite heavy and slow. It was interesting because of the regular explanations about flora and fauna.
Late morning we drove to explore  Lake Albacutya. The track across the top was narrow and sandy and really quite remote. Around lunch time it began to rain and this continued quite heavily for most of the afternoon. We were amused to see the sign pictured below. Sand is easier to drive in when it is damp so the normal dry sand on this particular track must be too deep to drive in.
The farmers will be pleased as their lands are dry and crops will soon need to be planted. We were told that some Mallee areas had up to 4ins.
On returning to the Jayco we were forced to idle the remainder of the day away. Rain is expected tomorrow so we will leave this southern end of the Wyperfeld NP and move north to camp on the Casuarina camp site. 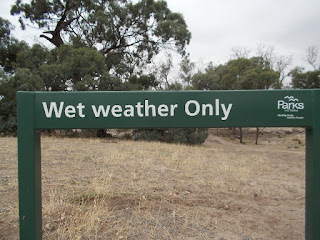 2017 April 19th
We have explored some areas of the Wyperfeld NP today. It is a huge park covering 365,800 hectares. It has 200 native bird species and 450 native plant species. There are several Mallee trees which we have not seen before and, of course many birds and other plant species which are new to us. There is plenty to see. Generally the bush is dry, but most trees look healthy.

We drove  along many tracks, and enjoyed a walk up to the Eastern Lookout which gave us 360 deg view of the surrounding areas. The Yellow Mallee tree was predominant along this track.  We also enjoyed the Mallee Walk which was only 1.5 km but it was quite hot, today, at a top of 31 deg. A short side track, from the Mallee Walk, provided us with a good example of a nest built by the male mallee fowl.
This evening Barbara and Bernard Young came up here from Rainbow to share a BBQ dinner with us.

Email ThisBlogThis!Share to TwitterShare to FacebookShare to Pinterest
2017 April 18th
Blue sky this morning but marred at times by smoke from burning off. It is a delight to see Mallee country trees with their distinctive nuts, flowers and trunks. Many rows of ‘sugar gums’ which are lovely tall trees with pretty orange trunks.  The tree we sat under at lunch time had quite large glaucous nuts.
The small Mallee towns are interesting and in most cases well cared for. We called to see Barbara and Bernard Young in Rainbow. They are settling into their new home. In their front garden they have a wonderful tree with large yellow blooms which come after vivid red buds in groups of four. John has identified it as Eucalypt Ilyarri.

Tonight we have arrived into the Wyperfield  National Park. Parking areas are widely spaced and well cared for. We walked to the top of Mt Mattingly before dinner. We are oh, so tired after a warm day.

April 17th
This year it has been necessary to change our mode of transport. ‘Earth Cruiser’ has gone by ship to South America. John A & Anneshka have waited 5 years for this to happen. In that time we have had some wonderful trips within Australia so now it is their time to enjoy our special home on wheels.
After much discussion we decided to purchase a caravan so we could travel north and escape the winter chill here in Victoria and especially in the NE.
Tonight is the first time we have camped in the Jayco Starcraft Outback. We have settled in the Greater Bendigo State Park. The bush is dry and the Park appears to be used very little. Our plan is to have 10 or 11 nights away to really understand the workings of this rig.